Treasures Among the Trash

One of the world’s most visible examples of desperate poverty lies on the edges of most metropolitan cities around the globe: garbage dumps. Their stench radiates for miles, and the many thousands of poor who eke out their existence rummaging through their endless mountains of rotting and often toxic substances are vivid examples of those who are ignored, marginalized, or abandoned by society.

Their lives are spent in search of cast-off materials, as well as scraps of food or other necessities that they can scrounge in order to survive. While those living on the garbage dumps of the world are not usually facing starvation, their plight is desperate and the proximity of the dumps to the centers of society make them a vivid reminder of the suffering and poverty that has engulfed so much of the world’s population.

I was given a chance to visit one of these dumps, which, though it is by no means even close to the magnitude of some such places bordering huge cities like Calcutta or Mexico City or Jakarta or Rio de Janeiro, is still a clear picture of abject poverty.

The city garbage dump of Tijuana, Mexico, not only “houses” all the garbage of this city’s 1.5 million inhabitants, but also over 500 men, women, and children who live there. They’re known as “the garbage people.” Most of them spend 12 hours a day sorting through the refuse that arrives in a continuous stream of large dump trucks.

Working on the mountains of trash is a hazardous job that barely provides a subsistence lifestyle. There are huge bulldozers moving mountains of garbage; visibility is low and sometimes people get crushed to death.

Young children work all day long with their parents. Many of the children were born at the dump—this is all they know. Living conditions are extremely poor, their food generally comes from what has been thrown out as outdated or spoiled; they compete with the many dogs at the dump, as everyone scrambles to find whatever they can salvage.

Those who minister here see this scenario of desperation and poverty playing out every day as they work to help those trapped by their circumstances.

We took an hour-plus drive with the director and his children to the dump to meet the people who live there. The dump itself is like a great crater with dirt tracks zigzagging along the sides, descending to its bottom. The stench was almost unbearable, as well as toxic if inhaled regularly. It wasn’t possible to go to the part of the dump where the people were sorting through the mountains of trash, as we would not have been received well amid the scramble and rush of frantic searching that was taking place. Instead, we went about a half mile from the dump to some of the shacks where families live. The people here don’t have ready access to water. It didn’t look like they had any toilets either.

Their shacks are made of cardboard, metal, plastic, wood or tarps that they have managed to salvage from the dump. While there weren’t many people left in the shantytown when we arrived, since most of them were hard at work in the dump, we did find three people working outside their shack going through a huge pile of short tape-like pieces of what turned out to be the shredded insides of electronic equipment, like TVs. They were going through each piece and finding any copper that they could salvage.

One woman, Elena, and her husband, Jose, were crouched down picking through this pile with their bare fingers, since the pieces were too fine to use gloves. She warned the director’s children not to touch it because it contained chemicals that would damage their skin as it had hers and her husband’s.

Elena was friendly and happy to talk with us and seemed thankful for the visit. Her sister appeared from another shack nearby and we gave them both some clothing and some tracts. I talked with them, sharing a similar message to what I had shared with the men at the shelter: This life can at times be almost unbearable, but if we accept Jesus and His love and the sacrifice that He made for us, one day He’s going to wipe away all the bad and make everything right and fair and beautiful. I told them that if they kept that hope in their hearts that it would give them the strength to keep going through the hard times.

They told us, “There are some people who are worse off than we are just over the hill.” We went up a little knoll and down a slope to where we saw several shacks. A young woman, whose name we learned was Maria, appeared in the entrance to her shack, which looked a little bigger than some of the others. As we approached, her three-year-old peeked out of the doorway, clinging securely to her mother’s hand. They were soon joined by Maria’s mother, Rosi, with a six-year-old boy in tow, and finally another teenage girl, Daniela, who was pregnant. Rosi and I (with the help of the interpreter) struck up a conversation about how bad things in the world are, but how God is going to make it right.

Rosi’s younger daughter, Daniela, was fourteen and in her last month of pregnancy. I had a little money with me and felt like the Lord wanted me to give it to her. I could tell she was pretty fearful about the prospects of having a baby. Furthermore, I imagine people wouldn’t want to bring new lives into that situation. I offered her the money, saying this was a gift that she could use for clothing for her child. She looked me straight in the eyes and said without hesitation, “comida,” the Spanish word for food. She understood all too well the difficulties of providing proper nourishment for her baby in these circumstances.

Rosi, Daniela, and her younger brother lived in another shack several hundred yards up the hill. As I walked with Daniela toward where she lived, there was an interesting, large display spread out over the dirt surrounding the shack. It turned out to be a menagerie of little cars and trucks. Many of them had obviously seen better days, but they had been laid out with care in various arrangements. I asked if they were selling those. She pointed to her six-year-old brother and said, “They’re his.” Even in a dump, parents try all they can to provide for their children, and apparently over time Rosi had salvaged these many cars and trucks for her little boy.

Next I returned to Maria’s shack and was invited to look inside. I was pleasantly surprised to see that even though the outside was plastic and cardboard, she had found a bedspread in the garbage and had it covering the bed. She had also found curtain material that was covering the walls so that it was colorful inside.

Across a small dirt path we saw two other individuals inside their shack. Two men in their mid-thirties to mid-forties were eating lunch and cooking on a tiny camp stove. One man was eating from a can of beans that he had presumably gleaned from the dump. Their shack was like a dismal, dirty storage room with all kinds of bags and boxes and things hanging from the ceiling. It didn’t look like they even had a bed or mattress. One of the men said that he had read the Bible. These people were amazingly positive for the kind of lives they lived.

We put our arms around people and told them we cared about them and loved them. We expressed that we wish we could alleviate the poverty and pain in the world, but the time is coming when Jesus will deliver the poor and the suffering and downtrodden. We said that we were looking forward to the life beyond where we would all be together in that heavenly city that was being prepared for us by our loving Father. In that place there would be no more inequality, no more hurt and pain. There would only be the joy of having every need met, every desire satisfied, and every hope fulfilled by the One who has promised to make all things right.

We gave Rosi some extra tracts and asked her to give them to her friends, because she seemed to be a special woman and one who would try to influence others positively. We said our goodbyes and went pensively back to the van for the drive home.

At least the people dwelling by the dump had some sort of way to raise a little income through what they could salvage and sell, and they had somewhat of a roof over their head and people who make regular trips to help them and minister to them.

The man who manages this mission project told me that a man who had lived and worked at the dump had gotten saved and gone through their discipleship program and now was working fulltime on their staff. It was a good reminder to me that even in the worst places or circumstances God reaches into the depths of despair to offer hope, to rescue those who will receive Him, and to transform their lives.

I couldn’t just leave Tijuana and forget this experience. There are garbage dumps in every country of the world, and there are thousands upon thousands of people living this way. Everywhere we go and in every country there are “Tijuanas,” with people, lost and forgotten, hopeless and barely managing to survive, living in the storm drains or on the streets. Many work as virtual slaves in sweatshops or as “mules” for drug cartels, doing whatever they have to do to earn a few pennies to survive and feed their families.

Lord, thank You for the example You set for us. You didn’t just see our need and turn away from the suffering and loss that man’s choices have brought on this world. Your love wouldn’t allow You to ignore the tragedy of the fruit of man’s sins. You were compelled by Your love for us to do something about it. Your love brought transformation of spirit to those who accept it.

Help us to follow Your example by having the empathy to not just turn our backs on those who are lost and torn and suffering in this world. Even though we can’t fix everything, even though we can’t solve every problem, we can face the need and look for what we can do to help.

We can step out to touch the lives of those within our reach. Stir our hearts to become aware of the need and to be moved by Your compassion to take action. Motivate us to do all that we can to bring hope to the hopeless and comfort to the despairing. In Jesus’ name.

I’m just one person, but I can make a difference if I try. How about you? 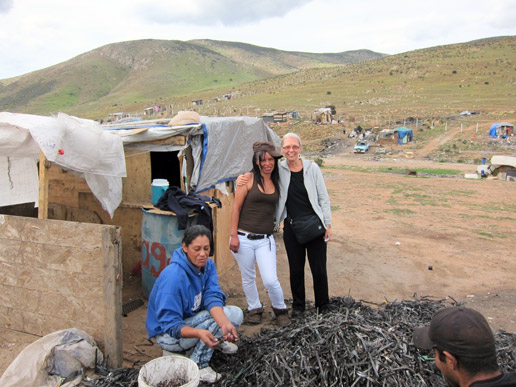 Elena, Jose and Lupe, outside their home. 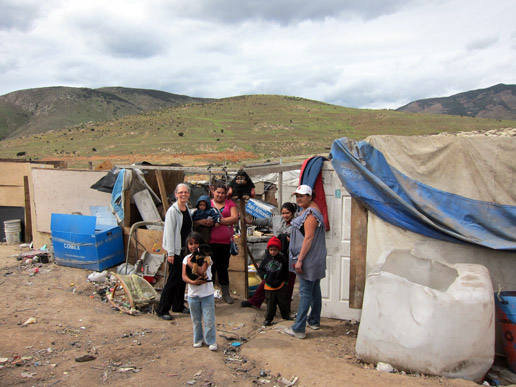 Rosi (right) and her family outside Maria's house. 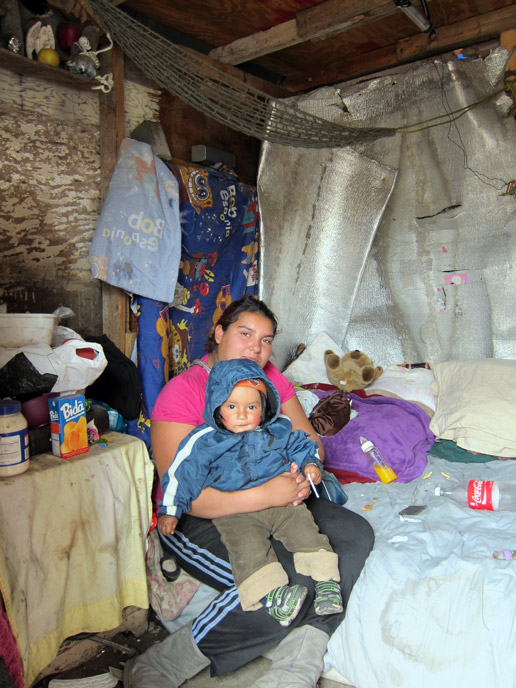 Maria and her daughter in their one-room house. 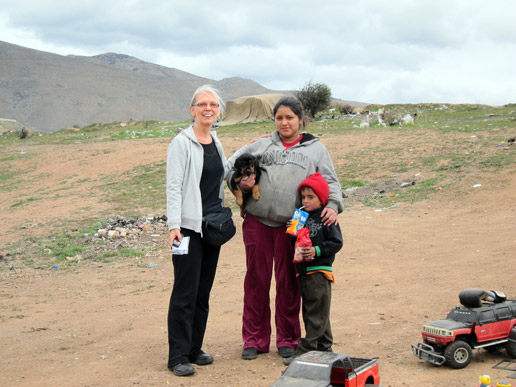 Daniela (14) with her little brother. 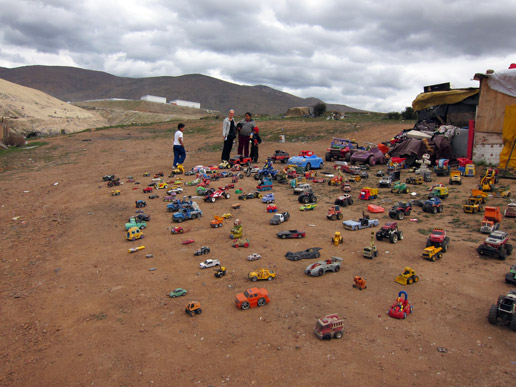 The collection of cars and trucks salvaged from the dump for the little brother.

Here are a few YouTube clips that show very similar conditions to those that these people live and work in.