(You may need to right-click the above links and select "Save Link As" or "Save Target As" to download videos and audios to your computer.)

In the first article of this series I explained that I’m approaching discipleship through four basic elements to being a disciple—Love Him, Live Him, Preach Him, Teach Him—and I offered a definition and explained what I would be referring to when using the terms disciples and discipleship. In this article I’ll cover the first of the four elements: Love Him.

Perhaps the most fundamental of the elements of discipleship is to love God.

When asked “What is the greatest commandment in the Law?” Jesus said:

Jesus makes a distinct connection between our love for Him and our obeying His teaching.

If you love Me, you will keep My commandments.[2]

Whoever has My commandments and keeps them, he it is who loves Me. And he who loves Me will be loved by My Father, and I will love him and manifest Myself to him.[3]

Jesus is stating that if we keep His words, the principles that He is teaching, it shows that we love Him. He goes on to say that there are blessings for those who keep His commandments and love Him, that they will be loved by the Father and that Jesus will love them and show Himself to them.

The Greek word translated as keep, when used as keeping His commandments, is tereo (tay-reh-o), meaning to attend to carefully, to observe. So Jesus is saying that those who love Him will observe, comply with, and follow what He has taught. This same word comes up in the following verses as well:

If anyone loves Me, he will keep My word, and My Father will love him, and We will come to him and make our home with him. Whoever does not love Me does not keep My words.[4]

Again, we show our love for Jesus through keeping His words, by living them, by putting them into practice; and by the same token, not keeping them infers that we don’t love Him.

If you continue in My word, then you are truly disciples of Mine; and you will know the truth, and the truth will make you free.[5]

The phrase continue in My word in other English translations is rendered as abide in My word, remain in My word, if you continue in My teaching, if you hold to My teaching.—All of which convey the same principle: that doing what His word says is a manifestation of your love for Him and it is one of those things that makes you a disciple. We love Him by following what He has said, and when we do that, we are His disciples.

That seems fairly clear, yet it’s much easier said than done, especially because Jesus has said some extreme things which are very difficult to comply with, and in some cases to even understand. Things such as:

If anyone comes to Me and does not hate his own father and mother and wife and children and brothers and sisters, yes, and even his own life, he cannot be My disciple.[7]

Those are very strong statements, which when taken literally seem to make being a disciple unattainable. It would be impossible for me to hate my wife and children, or my mother and father. Does this mean I can’t be a disciple? I believe we should look at the principle of what Jesus is saying here.

In Luke chapter 14, right before saying these things, Jesus told the parable of those invited to a great banquet.

A man was preparing a great banquet and invited many guests. At the time of the banquet he sent his servant to tell those who had been invited, “Come, for everything is now ready.” But they all alike began to make excuses. The first said, “I have just bought a field, and I must go and see it. Please excuse me.” Another said, “I  have just bought five yoke of oxen, and I'm on my way to try them out. Please excuse me.” Still another said, “I just got married, so I can't come.”[8] 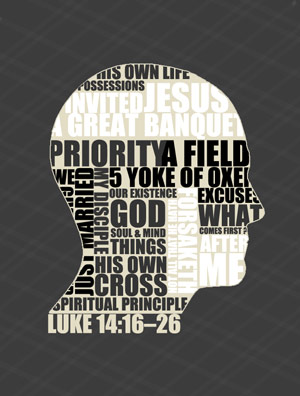 The people in the parable are putting possessions and family before the call to the banquet. When Jesus finishes the story, He turns to the large crowd that is following Him and says:

If anyone comes to Me and does not hate his own father and mother and wife and children and brothers and sisters, yes, and even his own life, he cannot be My disciple.[9]

Jesus is laying out the spiritual principle that heeding God’s call, following Him, and doing His bidding is very important; that to be a disciple, proper priority needs to be given to God, His will, and His call to you as an individual. And that having the correct priorities in life costs. It means carrying the cross; it’s a sacrifice.

Jesus isn’t preaching hate for your children or your parents or your siblings or yourself or even your things. He is saying that God is the Creator, and we owe our existence to Him. When people decide to be disciples, they are making a commitment not just to believe, but to follow, to make God’s priorities their own, to make His will for them their own. They give their primary allegiance to God. This doesn’t mean they have no allegiance to anything or anyone else, or that they don’t love others; it means that their first allegiance is to God, because they love Him most of all.

In principle, to renounce your possessions, to give them up, to forsake them, all have to do with the question of priorities. What comes first, God or your things? As a disciple, one who is committed to loving God with all your heart, soul, and mind, the priority is God. Not your stuff, not your house, your money, your investments, but God.

Jesus isn’t recorded as asking everyone who wanted to follow Him to physically leave all of their worldly possessions. Joseph of Arimathea was both rich and a disciple. From his being called a disciple, one can conclude that he had the right priority on his material goods in relation to God. It was this Joseph who supplied Jesus’ tomb, and who also used his position and influence to ask Pilate to release the body to him for burial.

When it was evening, there came a rich man from Arimathea, named Joseph, who  also was a disciple of Jesus. He went to Pilate and asked for the body of Jesus. Then Pilate ordered it to be given to him. And Joseph took the body and wrapped it in a clean linen shroud and laid it in his own new tomb, which he had cut in the rock. [12]

On the other hand, the call He gave the rich young ruler was different:

“One thing you still lack. Sell all that you have and distribute to the poor, and you will have treasure in heaven; and come, follow Me.” But when he heard these things, he became very sad, for he was extremely rich. Jesus, seeing that he had become sad, said, “How difficult it is for those who have wealth to enter the kingdom of God!”[13]

Why? Because often when one has wealth, it’s harder to prioritize it in relation to God, especially if He does ask you to give it up completely, or to share your wealth with others. The rich young ruler couldn’t let his wealth go and he was saddened by that realization. His possessions were his priority.

Forsaking, renouncing, giving up, all have to do with relinquishing the claim of ownership of material goods to God; they become His, and you are simply the steward. If He asks you to leave them behind as you walk on the path of discipleship, you do so, because God is the rightful owner of all things. A disciple’s allegiance is to God, not to things. A disciple’s allegiance is to the call God gives him or her.

When Jesus says “Follow Me,” He’s speaking to you personally. The path He calls you to follow is your path of discipleship. It’s an individual path, and each follower of Jesus has a distinct path. With the rich young ruler, the path Jesus asked him to take was to sell all that He had. Someone else’s path would be to keep the material possessions and follow God’s lead in a different manner. The principle is that the disciple belongs to God, his first allegiance is to God, and he loves God enough to do what God asks of him.

A principle of discipleship is loving God in a manner that makes you willing to follow what He shows you, no matter how steep the cost. The cost may be different with different individuals. So when Jesus said, “Whoever does not bear his own cross and come after Me cannot be My disciple,”[14] He’s talking about your own cross, your individual cross that you must carry. The call He gives you is yours, and your willingness to carry it is reflected in your readiness to give your first allegiance to God and His call for you. When He says to you, “follow Me,” He’s asking you to put yourself into His hands, to make Him your first priority, to give up ownership of yourself, to put yourself in the rightful place in relation to God, the sovereign of all. Jesus stated the proper priority when He said:

Understanding the principle of loving God, keeping His word, and the positional relationship that God deserves in relation to the loves of this life, and the possessions we have, provides a guiding principle which can help you in the life decisions you are regularly faced with. The basic principle being that God—our Creator, our Savior, and the Spirit that dwells within us—asks for and deserves our love and the proper allegiance and place in our lives. This is the starting place of discipleship. It’s in loving Him that we take the first step of discipleship.

(To read the next article in this series, click here.)