Experiences to Grow By

I’d like to give you some personal news about what I’ve been experiencing and involved in recently. A few months ago I needed an answer to something that was on my heart and I went to the Lord with desperation.

“Jesus, You know my passion is the mission. In one way or the other I want everything I do to count toward that. I feel like there is something missing that I need to do in order to be more effective, in order to be able to speak with more conviction, having seen the need up close and personal. I need to somehow come face to face with the suffering and destitution, the desperation that engulfs much of the world’s population. I need to understand what so many face every day of their lives: not only the spiritual suffering but also the physical deprivation. I need to be able to truly empathize with those who live in fear, with little or no understanding of what it is to be loved or cared for or to even have what we consider the basic necessities of life.

“I haven’t been able to do this before, Lord, but I feel like now is the time that I need to step out and go somewhere, but I don’t know where. I’m open to anything—anywhere, any situation.

“My health and my eyes are weak from traveling to attend to business and see Phoebe, and it seems crazy for me to now go to a place with very poor and basic conditions. There’s bound to be a lot of sickness and disease. But You seem to be laying this on my heart, and if You want me to do it, I’m trusting that You’ll lead me, keep me, and help me to learn the things that You have for me. Help me to be a blessing.”

The Lord showed me to look online and He quickly led me to a website of a ministry in Tijuana, Mexico, a city which is on the border with Southern California. It was a “no frills” endeavor that encompassed many different projects and seemed to have plenty of God’s Spirit in it.

I decided to put out some feelers. I wrote an email to the director, and within three hours had a response confirming that I would be welcome to come and there would be a place for me and whoever I wanted to bring with me. The message said, “Let us know the time and we will pick you up at the airport.”

I asked a few more questions about the situation, and the director responded that they used to have more groups of Americans coming to see the work, but that over the last year the numbers had dropped off drastically due to the “fear factor” relating to the surge of violence in Mexico—the drug cartel wars and the many murders that had taken place. He added, however, that some groups were planning a visit shortly.

I was prepared to go on this mission alone, if need be, but the Lord touched the heart of a TFI member, a fluent interpreter, to accompany me and who I could counsel and pray with.

Upon arrival we were impressed with the dedicated, sweet people who were in charge and the genuine care they showed to us—two older, gray-haired women—who had come to experience their work. I found that with everything else they had to do, they considered their visitor ministry very important and they gave a lot of attention to explaining their work and letting their visitors see and participate in it.

While there, we visited the men’s shelter; their orphanage; and went to the red light district in town, which they have a great concern for and from which they have won a number of the women to the Lord. We went to a center where they help recovering addicts through discipleship training, and went with them to the city dump, where they minister. They also go to the streets every week to feed the homeless, as well as invite homeless women to come once a week for a hot breakfast and shower. They minister to many youths from dysfunctional homes, and the Lord recently provided a youth minister for them so they could expand this ministry.

Although it is heartbreaking to see so many desperately poor and needy, the atmosphere at this mission is one of hope and positiveness.

We saw dedicated, transformed people who no longer had the ravages of sin on their faces and the pain of spiritual and physical destitution marring their lives. We saw beautiful, praiseful, and full-of-faith people that God had supernaturally changed, and who were in turn helping and caring for others. 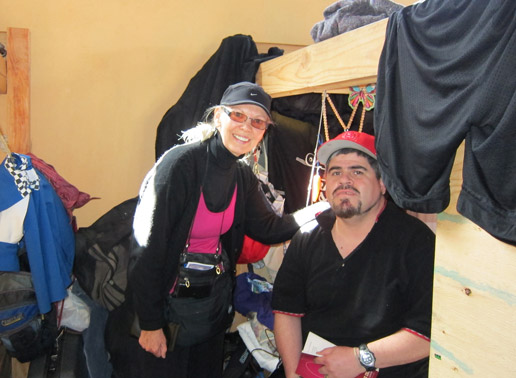 Encouraging a homeless man in the shelter. 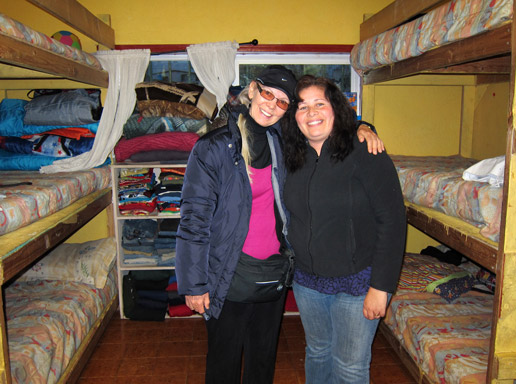 A staff member who helps manage the orphanage giving me a tour of the facility.
This is one of the boys' rooms. 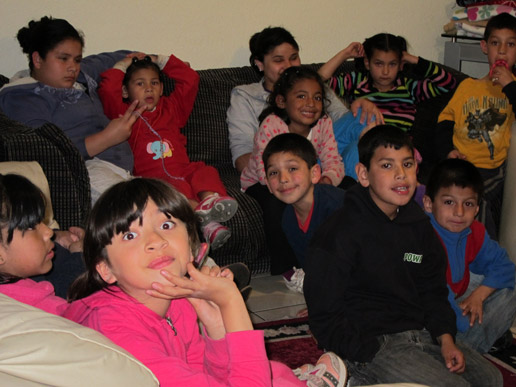 Some of the children at the orphanage. 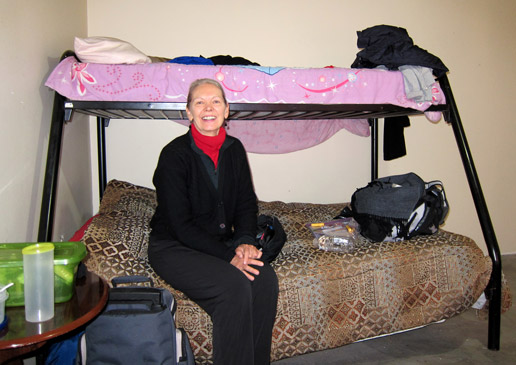 Our little corner of the room we shared with a third woman.
Simple but clean accommodations.

I saw what I had come to see. I heard what I had come to hear. I went to the places that I needed to go in order to see a microcosm of the pain of a high percentage of the world that I rarely see. It’s so easy for me to use the term “homeless” without feeling the homelessness, without imagining the storm drains and other places where so many huddle, clutching their few possessions and possibly a blanket in fear every moment that they will be attacked, robbed, raped … and when the rain comes that they will have to evacuate quickly or be waterlogged or drowned. It’s so easy for me to talk about drug addicts without envisioning the grip this vice has on their life, resulting in constant frenzied panic when they don’t get their drugs; the dirty needles, and the crime that some engage in in order to get their fixes; the rejection of their families, the loss of their homes and relationships.

It’s so easy to say “prostitution” and not call it what it is: sex slavery. These people are often exploited and in fear for their lives if they don’t bring in the money from the sale of their bodies that their pimps, their “owners,” demand. Then there are the many poor women whose husbands have left them alone with three, four, five children and no support whatsoever, who have to send those little ones out on the street to beg for every mouthful, where they are at the mercy of unscrupulous, evil people who take them for their own devices and they may never be seen or heard from again. Or the orphans who have it even worse, if that were possible, since they have no mothers.

Then there are the thousands of men, women, and children who have lived as illegal immigrants for many years in the U.S., where they enjoyed reasonably good lives, who end up being deported, dumped across the border into Mexico with nothing—no home, no contacts, no ID, no way of making a living, destitute. Many of them, finding themselves in dire straits, fall into the hands of the drug cartels, forced to be their slaves, forced into an underworld war zone of fear and lust for power, and hate and murder.

This is what so much of the world is made up of. I realize I need to see this once in a while. I need to be reminded vividly of what a job there is to do, how God weeps over the brutalization of the world, the devastation, the plundering of the world and His creations.

It’s easy to talk about it, but the real issue is what can I do to bring about change? Why force myself to face such horrific desolation if there is nothing I can do? I think God is telling me through this that there is something I can do. I can’t do much physically or financially, but I must do what I can do. Even if I can only pray. Even if I can only tell you. Whatever He shows me to do, that’s what I need to do.

I was impressed with two articles on our TFI news site about a ministry at a garbage dump in Egypt. I urge you to read them. (Part 1 is here, and Part 2 here.) It shows what one man impassioned, envisioned, and obedient to God’s call was able to do. Probably most of us are not going to do something that major, but we can make a difference by seeking out the desperate and the traumatized, the wretched, the hopeless, the anguished. They are in every country, in every city, and we can make a difference to them—whether it is in the lives of many, or one, or two, or three. Their lives will be blessed because you took the time to bring a touch of God’s love to their hearts and minds and bodies. Jesus is proud of us when we follow His example of loving and caring for the weakest and neediest. He rejoices when we bring Him and His love to others through our actions and our words. Can there be any more important task than that?